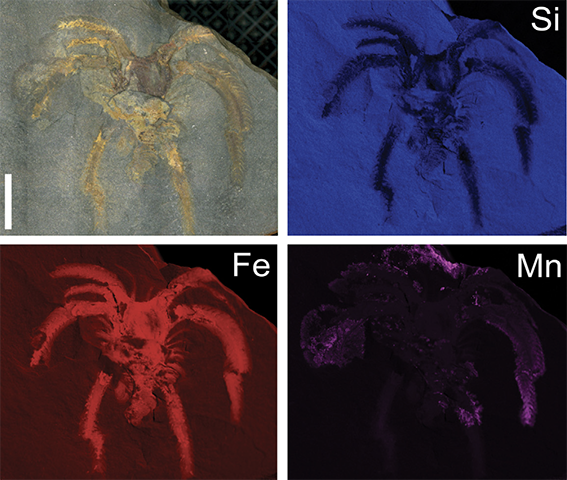 In a paper led by Farid Saleh (University of Lyon) and published this month in Geobios, we provide insights into soft tissue taphonomy in the Fezouata Shale based on a detailed sedimentological investigation constraining the facies in which exceptional preservation occurred, in addition to a careful geochemical analysis deciphering the mechanism leading to the current patterns of preservation in this facies.

The Fezouata Shale in Morocco is the only Lower Ordovician Lagerstätte to yield a diverse exceptionally preserved marine fauna. Sediments of this formation have yielded soft to lightly sclerotized taxa that were previously unknown from the Ordovician. Yet, the step-by-step mechanism behind their preservation remains largely unexplored. Most fossils collected in shales are preserved as molds or imprints on the sediments, but it is unclear whether these organisms were originally preserved as carbonaceous compressions, such as in the Burgess Shale of Canada. Other non-biomineralized tissues, such as trilobite digestive tracts and echinoderm water-vascular systems, are preserved in 3D red to orange iron oxides. Considering that numerous diagenetic mechanisms may alter the original anatomy of fossil organisms over geological time, deciphering the taphonomic processes at play in the Fezouata Shale is essential for palaeontological interpretations, especially for taxa without extant representatives.

This work largely focused on the study of new drill core material. We established a strong association between exceptional preservation and a specific sedimentary facies in the Fezouata Shale This facies corresponds to calm sea-bottoms, sporadically smothered by distal storm deposits. The patterns of exceptional preservation in this facies indicate that most animals were dead and decayed on the seafloor prior to their burial by distal storm deposits. Furthermore, contrasted elemental and molecular compositions between fresh-cored and altered materials show that surface deposits of the Fezouata Shale were substantially affected by recent weathering. This weathering resulted in the leaching of organic materials from fossils originally preserved as carbonaceous compressions and the transformation of pyrite into iron oxides. Understanding the processes behind the current patterns of soft tissue preservation in the Fezouata Shale is essential prior to any palaeontological description, especially of taxa with no current representatives.