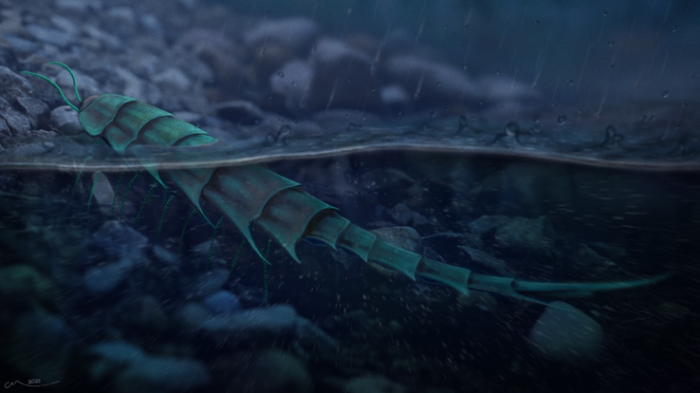 The invasion of land by animals, followed by the establishment of complex continental ecosystems, is a critical event in the history of life on our planet. Nonetheless, little is known about most of the pivotal morphological and physiological adaptations imposed by the water-to-land transition, and particularly air-breathing, because the fossil record for early terrestrial animals is extremely scarce. This is particularly true for myriapods, a large group of terrestrial arthropods including centipedes and millipedes, for which almost no record exists of their aquatic to terrestrial evolution.

In an article published today in the Royal Society Open Science journal, my collaborators and myself describe a unique fossil dating from the Upper Devonian (370 million years ago). Discovered in the 1970s in Belgium by Professor Édouard Poty during a field camp, and named Ericixerxes potii, or “Poty’s hedgehog king” in honor of its discoverer and in reference to its long and large spines (‘ericius’ designating the hedgehog in Latin), this fossil recently rediscovered at the bottom of a drawer is a strange arthropod belonging to the group of euthycarcinoids.

Euthycarcinoids are rare fossil arthropods that disappeared during the Triassic, some 250 million years ago. They are as fascinating as they are enigmatic: fascinating because they are considered to be the first animals capable of (at least brief) incursions on land, as early as the Cambrian some 500 million years ago! And enigmatic because for a long time palaeontologists had no idea of their precise position in the family tree of arthropods… until they were finally identified this year as the aquatic ancestors of myriapods.

With only a single specimen of this new fossil at our disposal, we used innovative major-to-trace elemental X-ray fluorescence mapping at the Stanford synchrotron to extract as much information as possible from this arthropod about 10 cm long. The distribution of certain metals and sulphur revealed hitherto invisible morphological details: arsenic and copper uncover a pair of chambers most likely involved in subaerial respiration that clearly differs from the tracheal system of modern myriapods, and sulphur unveil shallow-water evaporation structures.

This new information provides strong support for an amphibious lifestyle in euthycarcinoids and indicates that different respiratory strategies have been used during the marine-to-terrestrial transition in the myriapod lineage, later replaced by tracheal systems.

We also emphasize the significance of the novel methodological approach used in this work. While X-ray micro-computed tomography is now regularly used to virtually extract hidden internal information in 3D-preserved fossils, it often fails to reveal hidden anatomies in flat fossils such as our specimen of Ericixerxes potii. This study demonstrates, for the first time, the potential of synchrotron X-ray fluorescence mapping for the visualization of new characters in fossil arthropods. This method, so far essentially applied to fossil vertebrates, has potential applications in all fields of palaeontology and provides a new way of extracting anatomical information from a wide range of compressed fossils.